Well, I was in two minds whether to head through to St Andrews this morning. The idea of being a part of a massive crowd of people, standing for hours to catch a short glimpse of Prince William and Catherine MIddleton, as the visited St Andrews today….I was up for it, but the thought of hauling along at least one of my cameras if not both… and then there was my 2 year old daughter – how busy would it be? Was it worth it for a fleeting glance of them as they swished pass? I threw caution to the wind and went for it – afterall it was a once in a life time opportunity – what other chance would I get to see the future King & Queen? The funny  thing is, that I am not overly bothered by the whole royal thing – but it was a moment in history and I thought it might be good to be a small part of – something to tell the children about when they get older….Plus it was a too good an opportunity to pass by – I went to school in St Andrews – and Andy and I were married there in 2002 during the Kate Kennedy Procession. So it seemed like a nice chance to add to those memories of one of my favourite places.

The journey though was really no busier than normal – the only difference being there were a few sign posts instructing drivers that various roads were closed, and directions to alternative parking places. That, and a very visible police force!

So, as directed by several police, we truddled off down to the West Sands, parked up and bundled my daughter into her buggie and one camera underneath and the other thrown over my shoulder! 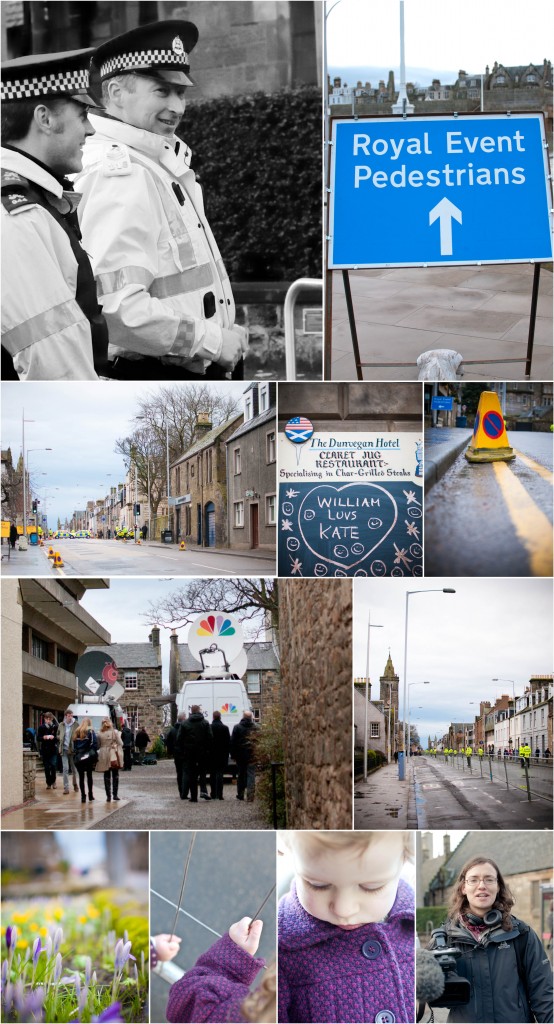 When we arrived in North Street – there were some crowds – but nothing overly busy. We headed up the street and spotted a few photo opportunities along the way – the Dunvegan Hotel, they had written the newly engaged couple a little message – see if you can spot it above! I was interviewed by the woman you can see on the bottom right of the photos – for deadline news – click here to read the article – I really wish I had said something a little more intelligent! 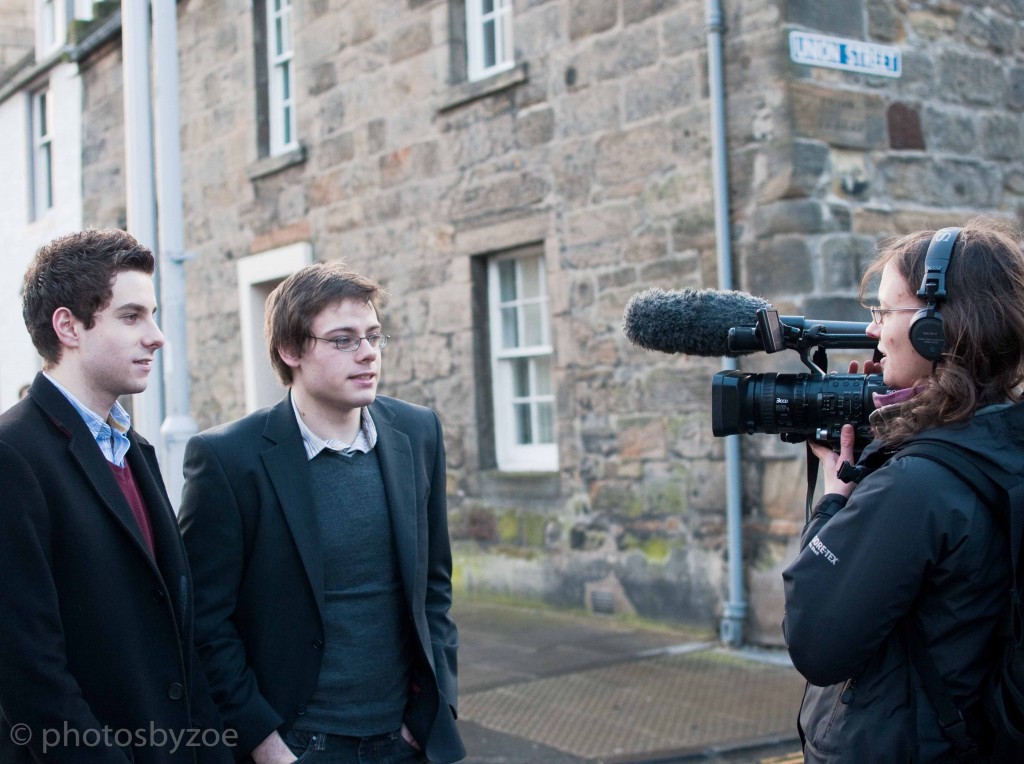 and here is the link to the interview from these two students.

Little ‘M’ and I had  a bit of waiting about – I chatted to people beside me in the crowd. Meeting a cute little girl called Fern and her mother – who had originally come over from Texas. 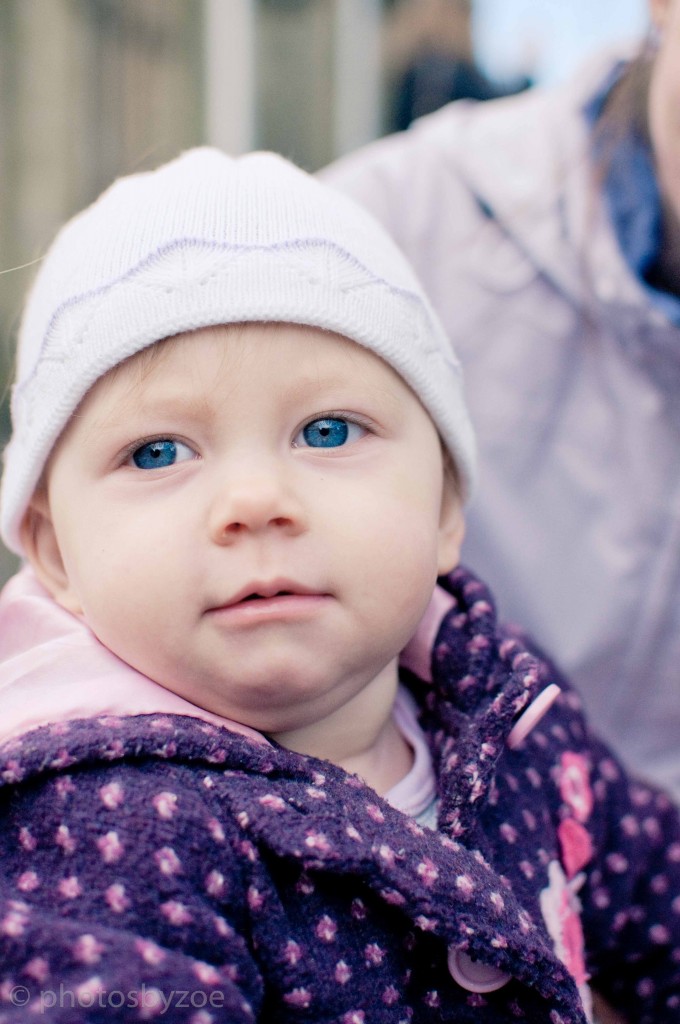 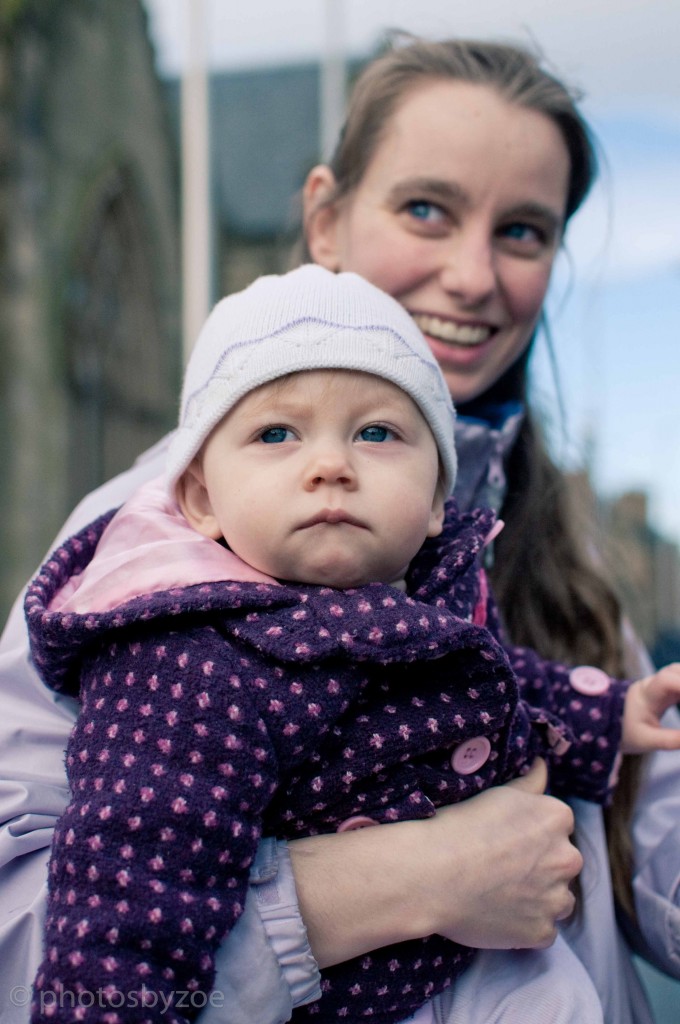 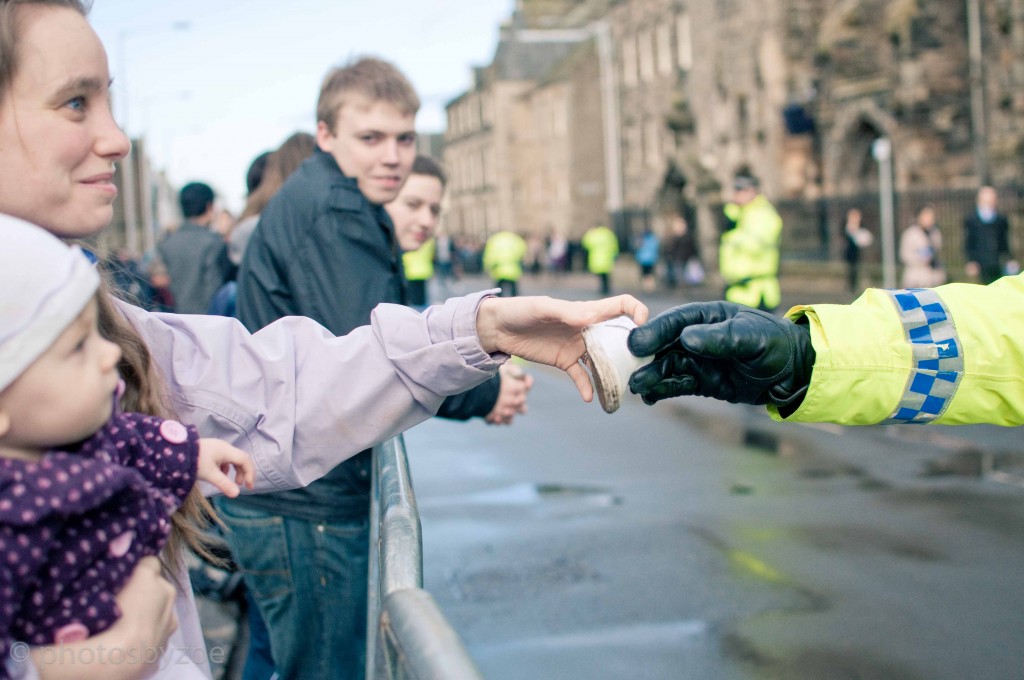 Little Fern’s shoe was rescued by the nearby Policeman!

so….was it worth the wait you ask…. check out the next post to find  out!!

Hi Zoe, is Catherine Woods and I wanted to congratulate you in the awesome pics posted in here… You have so much talent is awe inspiring 🙂
I am a huge fan of your work and will be lining up to see more of your work….
You’re a flower in bloom… that opens up more and more to the rays of sunshine, as the days go by and your work peeps out of the close bloom and smiles to the shining sun :)))

Love the incidental “stories” going on throughout the day, well captured. Got me hooked – want to see part 2! Well done Zoe.

Thank you Angela! Yes, it was a day full of memories !

this is so cool.. Prince William and Ms. Middleton are on the entertainment news here all the time..

They feature quite a lot in the news here too! 🙂

I was the bobby standing at your point. My wife is wondering if you took any photo’s of me (heaven forbid)? If so let me know and I’ll tell her Hope you had a great day.

Hey Bruce!!! Well done for tracking me down!
Bruce – I have LOADS of photos of you 🙂 I’ll edit the best ones and share them with you 🙂 You didn’t break my camera like you feared!
I have a few others of your colleagues too – there were enough of them about!
It was lovely to meet you yesterday – it was a great day!
Zoe

Hi Bruce -if you follow this link, this will take you straight to my Facebook Business page – there are more photos on an album there – with a few of you 🙂